Notice: Only variables should be passed by reference in /home/fabuplus/public_html/wp-content/themes/thevoux-wp-2.7.1/admin/ot-loader.php on line 329
 AboutU – Lisa Linke – FabUplus Magazine
About U
October 7, 2018 by FabUplus Magazine
0

Lisa is an actress and improviser who got her start in Chicago, where she studied at Second City and performed at well-known venues like The Annoyance. She has acted in several TV shows and web series. You may have seen her in the comedy web series Successful People, which is available on Amazon Prime. She’s also recurred on Teachers and appeared on hit shoes such as Black-ish, Shameless, This Is Us, Modern Family, Netflix’s LOVE, and most recently, Disney’s Bunk’d.

She also enjoys bringing her own content to life. She co-created, wrote, produced, and starred in the award-winning web series Ren & Len Fix Shit In Your House. She also portrays Abby Lee’s equivalent, Waggy Lee, in the Dance Moms parody web series Dog Moms – another web series she created. You can see Dog Moms on Amazon Prime starting October 8th!

Why don’t you take a minute to tell us a little bit about your story and how you got to where you are now?

Thank you! I’m a Midwesterner who has traveled around the world and likes to make people laugh along the way. I’ve always been a performer, and during grad school I discovered improv, and my life has kind of veered toward a full-time acting career ever since. Five years ago, I moved to L.A. after living in Chicago for over a decade. While I did mostly improv and sketch in the Midwest, I’m now focusing on TV and film out here in Los Angeles. I love it!

When did you begin to embrace your own curves and can you share with us about your own personal journey to self-love and body acceptance?

I mean, does anyone ever truly arrive at self-love and acceptance? That feels like an end destination vs. a constant journey. Even the most self-compassionate among us probably have some days where they speak harshly toward themselves or get inundated with imagery and messages out in the world, that are inconsistent with self-love. So, I guess I’m more comfortable saying I’m on a journey and have learned a lot from body positivity thought leaders.

Why do you think it is so important to share our stories with others?

I love relating to other people’s experiences, so I don’t feel so isolated and alone in what I’m going through. I think it’s very powerful. I was in group therapy back in Chicago, and it was the single most influential thing that helped me really develop skills quickly in terms of intimacy and acceptance, as well as self-acceptance and compassion for myself. Individual therapy is wonderful, and group therapy is like that dialed up to a ten – in terms of having to process what’s happening, really getting your buttons pushed and not being able to suppress feelings and learning how to process and manage them. I absolutely recommend it to everyone!

With the online popularity that you have been receiving, I am sure there also comes with it a little bit of negative attention. How do you manage to stay so positive when there are quite a few critics out there commenting on your appearance rather than focusing on your successful body of work?

I don’t feel like I actually receive a lot of negative attention. Who are all these critics?

I guess I like to challenge this idea from the get-go, and not expect that people focus on my physical shape vs. the type of work I do, the quality of work I do, and my capacity to do it. In addition, I like to challenge the assumption that everyone doesn’t get critiqued on the way they look by people who aren’t valuing someone for the quality of work, but instead for the physical shape they show up in. Especially women, especially online. This happens regardless of size, so I think it’s a fallacy to assume only one body type gets this kind of critique.

I also get stuck on this question sometimes, because it implies that people shouldn’t be positive when people comment on their appearance…that they don’t have the right to be confident or positive or happy or fill-in-the-blank. Of course, I know that isn’t your specific intention in asking. I like to be very careful about answering questions like this because I feel that, by even answering, I can give validation to the assumption that underlies it. It’s kind of like when someone asks “where do you get your confidence?” They may mean well, but the underlying assumption is that you shouldn’t have any confidence at all, or should really struggle just by existing in the container you live in.

So, ultimately, I want to challenge the question-askers to frame the question differently – to ask about how individuals overcome setbacks or challenges – because maybe the person being asked has body-type specific challenges, and maybe they don’t. But to assume they do, in my opinion, reinforces an older paradigm. And I love a good paradigm shift!

What is the overall message you want our readers to gain from your story today?

That old modes of thinking are everywhere and it takes work to change them, both internally, and externally.

What are some tips you can give to women with curves who are just starting their body positive journey?

Be mindful of the messages you consume. If your Instagram feed is full of impossibly attainable, airbrushed bodies doing crazy yoga poses, or constant suggestions on how to lose weight or what foods are good or bad for you, that’s potentially harmful messaging. Find some body positivity (which is totally different from body acceptance – and learn the difference!) people to follow, and see how having different images in your feed might change the way you think about yourself or even feel about yourself. I suggest Dana Falsetti, Jessamyn Stanley, Jes Baker, Megan Jane Crabbe – and find great authors (the above have books and content) as well as Lindy West (though she writes about everything, not just body positivity) and so many more! Fill your mind with messages outside conventional messaging.

If you could say one thing to our readers about body positivity, what would that be?

Body positivity is different than body acceptance. And the reasons why they are different are very important.

What are your plans for the future? What else do you hope to take on?

Thank you for asking! I have a guest star on a Disney show coming out soon, and my episode of LOVE on Netflix was just released, so I’m happy with that. I also just released a new, very short web series called Dog Therapist, which people are loving! You can find it on YouTube. So, I’m up to making some more content this spring and summer for sure. Then of course more of the same: more TV and film auditions and bookings!

FabUplus is the only body positive health, fitness, and lifestyle PRINT magazine with weight neutral content specifically dedicated to women with curves. What are your thoughts on this new media platform for the plus sized community?

I think it’s a fantastic resource for anyone! My hope would be that eventually, your content would be accessible to men as well since they experience size discrimination. Also that you continue to explore body positivity as it exists in an intersectional way so that your content is available to a lot of groups who experience being left out of the traditional images and marketing by companies. Congrats and great job! 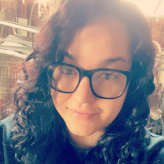